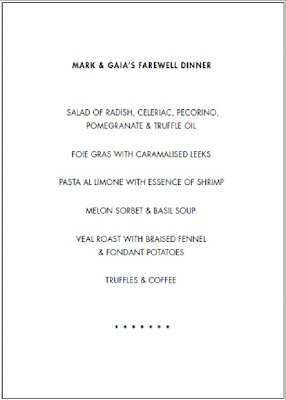 ’s only two Michelin star restaurant, probably only worth one star but probably got the second on the basis of it being very innovative. Baroque building, rather austere interior and rather stiff service that was trying too had to live up to the two star billing. I suspect they are trying very hard to distinguish themselves from the rather informal/casual air of in general.

We had a 15 course tasting menu. This is not quite as large as it sounds as 9 of the dishes where very small antipasto style dishes some of which where only one bite. Nonetheless that means we had 9 small and 6 normal sized dishes. This completely overpowered my appetite!

Much of the food was not terribly memorable such as the local langouste served raw with honey as a one bite dish. Pleasant, fresh but not memorable. Similarly, a dish of raw sea urchin and ricotta sounded exiting but did not live up to its billing.

Posted by thoroddsson at 1:50 PM No comments: Links to this post